Please did someone get this Piercer to drop? I've killed the boss mob about 12 times and every single time I got one of the other 5 possible drops, except this rapier! I've got scale boots 4x, reinforced boots 3x, staff 2x, bracer 3x but no rapier! It's getting frustrating really cause I need to kill about 40 blue/yellow con mobs before reaching the boss and the boss spawns 12 oj con mobs in total (who hit like a grey so they're easy) but the problem is I'm lvl 24 and I get about 6 bubs of xp each time I go thru the dungeon and kill the boss...So that means I need to suicide every time to do it again cause otherwise I'll be lvl 25 without having any fun in thid. I really want this piercer, it has great stats and a nice proc and it's glowing. I checked the Market Explorer but no one sells it. Please tell me if you got this to drop, I'll pay you 500g for it if you have it and want to sell. It's this one: 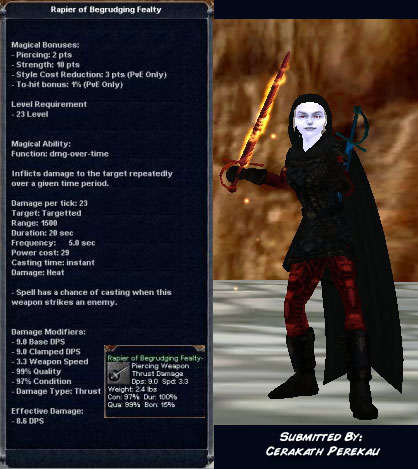 It's dropped off the boss mob called Spirit of Elon, found in Serf's folly (instanced dungeon inside Muire Tomb). The instanced dungeon will be set to a maxed lvl that suits 4x lvl 22 players. They were all grey when I went there with my enchanter (lvl 48), so this boss should be green for someone that is about lvl 36-38. If someone from that lvl can farm him over and over again and get this piercer to drop, he'll earn easy 500g cash cause I'll buy it from him

had that rapier ^^ thikn its been sold of my ME for 50 gold recently.

Neffneff said:
had that rapier ^^ thikn its been sold of my ME for 50 gold recently.

ok please tell me how you got it to drop at least, how many times did you had to kill him? I mean I've killed him 12x, the mob drops 5 different items, I got 4 others except this one...Like the mob knows I'm after the rapier and to piss me off he just doesnt drop it, instead he drops all the items I got before again and again
T

just want to know if this rapier actually has a chance to drop, killed him a few more times which makes the total to about 15 times but he just doesnt drop the rapier...Got 4x scale boots, 3x reinforced, lots of same bracer and 3x staff drop so far . Please just want to make sure it drops so I'm not going thru the whole dungeon for nothing

btw I've read about this rapier on the daoc.catacombs.com class forums, no one their talked about a rare drop everyone says its easy to get it...Maybe it's added in the EU in a later patch or am I just unlucky?

The wife actually picked the rapier up, and she told me last night she didnt sell it..but gave it away to a n00b daoc roller 0o

ill check with her later how she got it..but im pretty sure it just dropped fist time for her.

its all about luck really...

Cruhar said:
its all about luck really...

I believe it's just me, I'm fecking unlucky and I'm pretty sure someone else can farm it in 1-2 tries . And if you're lvl 30-35 you can just kill the boss mob without needing to kill all the aggro mobs to get to the boss, cause the regular mobss will be grey and the boss mob will be green/blue likely. So it's just a matter of killing the mob in 2 mins, getting out, waiting 5 mins to get the instance repopped, kill the boss again etc. Pretty easy way to earn 500g + lots of nice items for your low lvl alts

It's my birthday today!

can I PM your wife and ask where she bought her luck? =)) Or can you try to find out? =) I need such luck for scrollfarming.
T

Ok great thanks and like I said its just me...I saw someone else running in thidranki with this piercer and I asked him how much tries he needed to get it dropped....He said it dropped at the first time

I'll try to contact you when I'm online this evening
T

Thanks to Neff and his wife (sweetlollypop ), it's sorted out now :worthy:

Sold that 1 for 800 G, had it on my Vamp Vlerk after it dropped in Muire

but get a crafted 1, stats are not that good and it s 99% quality
the glow effect is nice though

exactly where can this weapon be found? i mean where is Spirits of Elon, is he at one place all the time or is he patrolling an area? how do i get to the place that he is at? if anyone has one pm me and i will pay for it ^^
T

All the bosses (well mostly) are at the end of the instanced dungeon. You don't need to kill all the mobs to get there, however all mobs are aggro so you can't get to the boss without killing the mobs on your way. Just go to Muire Tomb, turn right at the first 4-way, get down the stairs and walk a bit till you see the entrance of the instance on your left side. After you're in the instance just keep walking, don't turn left or right at any 4 ways and you'll meet the boss at the end of the instance automatically. He'll first spawn 2, then spawn 4 and after that spawn 6 oj con mobs who have like 100 hitpoints and hit like a grey con so they're very easy to kill. After you've killed all of the mobs he spawned Elon will come to fight you himself. He's just as hard as a regular red con mob, only thing is he can cast an insta dot on you (doesnt hit that hard, like 10-15 damage per tick) and does lifetap you about once every fight...Easy to do for a vamp, not sure about other classes

Btw I've also got a crafted MP piercer with better stats but I'll use this one for PVE cause it has style cost reduction on it which is really nice...A style that costs 8 endu will cost 5 with this piercer...And the dot proc is better than a DD proc as it hits for 100 damage total when it procs

Dropped 3rd visit for me, passed on to a guildy so not got it anymore nice little piercer with great 'glowy dripping effect' and the style reduction/dot nice, not bad for a drop in Muire
A

the piercer if feckin uber for lvl 22-26 range not too mention it looks soooo nice. regarding its stats, capping stats/hits/resists its not a problem up to lvl 35 or even a bit more
You must log in or register to reply here.

Gem of lost memories levels of..?

Return of the PUG of doom ... take II